Warning: Don’t try this at home!

You didn’t read that wrong. Alex Roy and David Maher broke the previous transcontinental record of 32 hours 7 minutes just over 6 years ago. When most people think of Columbus day they think of the Atlantic voyage to the new land. When Alex Roy thinks of Columbus day I’m sure he thinks of his voyage.

I’m going to take a minute to explain the absolute insanity of this voyage to you. New York City to Los Angeles is just under 2,800 miles. Thats 2,800 miles! Google maps says it should take 45 hours. They made it in just over 31 hours with an average speed of over 90 mph (and a top speed of 160mph!)

So what would make someone want to do this? Well to answer that you’ll need to read his book.

The Driver: My Dangerous Pursuit of Speed and Truth in the Outlaw Racing World

It is a fantastic book for everyone. It talks about his own rendezvous, cannonball run and the famous trip. Quite frankly I don’t want to be sparknotes and he really does tell the story best (I think that might have something to do with the fact that he was there… I was not)

C’était un Rendezvous is a fantastic short video shot in Paris in 1976. If you haven’t seen it you have to! . This is a video that words can’t fully explain its magic. It was shot with a Mercedes Benz 450SEL 6.9, for those of you who don’t know thats a luxury sedan. “But I hear a Ferrari 275 3.3L V12 engine!” What good ears you have there. Yes you are correct. The sound was dubbed over. The result is nothing less than magical. So why do I bring it up? Well Alex Roy talks about it in the book (you did order it right?) and he tried one of his own…. In New York City. Still waiting on the video from that trial run..

Update: Youtube took down the original video, all I can find is this copy with sinnerman dubbed over it.

Found another version but it only contains half of the video

So your wife has taken out a 5 million dollar insurance policy on you, you have a co pilot and you’ve spent hundreds of hours playing video games and months plaining the route in Google Earth. Now what? Well now you need a car. Not just any car fits the build though. You need something fast. You need something reliable (if all else fails make sure you know German). You need something that gets good gas mileage and you need something with enough space to put all of your toys in.

But who am I kidding? This car is no where near normal. There is a beauty to that fact. I feel as though if I drove this car 5 feet I would get arrested for breaking a dozen local and federal laws. (Although Alex that doesn’t mean I wouldn’t drive it if you gave me the chance! I promise to keep it under 160mph) This is a car that is great for going across the country… whether that be in North America or Europe. 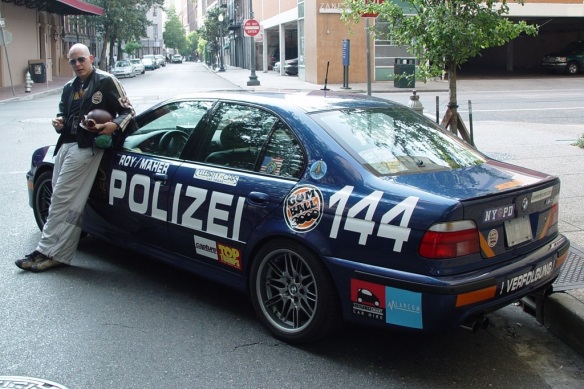 What do you get when you bring a bunch of super cars and wealthy people with money to burn together? You get Gumball! An event that brings together people that enjoy driving fast and partying. 3000 miles in 7 days. I would love to participate in Gumball 3000. So I did what anyone would do. I went on their website, headed to the FAQs and scrolled down to “how much does it cost”… My heart sank. £30,000. Thats almost $50,000. Yeah I don’t think I’ll be able to participate anytime soon. My guess is you won’t be able to either. Fear not. Youtube has your back.

Thank you Alex. Not only did you break a record you are allowing many people to live vicariously through your trips.

Full Disclousure: I read the book, I paid for it with a gift card and I didn’t get any money for writing this. Guess I’ll be eating cold ramen for dinner…